Posted on July 9, 2013 by sallyscottsart

The National Arts Festival 2013 has come and gone and the good people of Grahamstown are now in the process of recovery!

It was a great festival and though I am in a complete state of exhaustion, I am very happy that everything went off so well. Hundreds of people came through my exhibition Delta & Desert: Journeys into the Wilderness, and I was overwhelmed by the positive feedback and support for my work, and thrilled to have sold as much as I did, given the tough economic climate.

The rhino have definitely benefited from the enthusiastic response I received and I am about to deposit a healthy sum of money into the Chipembere Rhino Foundation, which was raised from the sale of Harry Owen’s poetry anthology, For Rhino in a Shrinking World, as well as from the sale of numerous cards and prints of the illustrations.

So, thank you to everyone who helped to make the exhibition such a success, especially my family and friends who gave me so much support and helped in so many ways. I could never have done this without you.

For those of you who were not able to be there, here are a few photographs of the exhibition:

A view of the water lily wall

A view across the exhibition towards the Richtersveld section 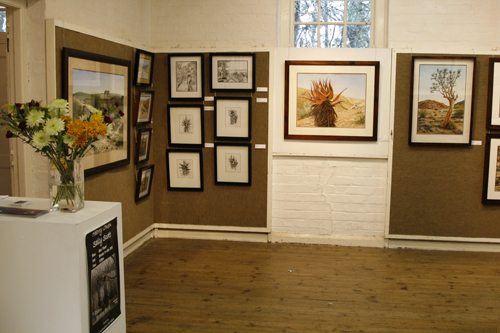 The rhino corner, where the rhino anthology, prints and cards were on display

Sally in attendance at the Delta & Desert Exhibition 2013

So that’s the festival done, now time to relax and plan where to from here.

In my next post I will be chatting about  my work In Memoriam and the presentation I gave at the LAWS Conference, that was held at Rhodes University during the National Arts Festival. Stay tuned, there’s lots more to come…!